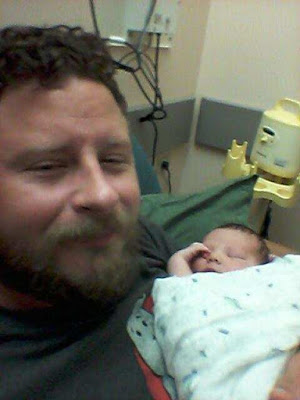 No doubt about it. There is a lifetime of redemption in a child. God knew that when He gave us His. It has been a few hours now since the birth of our second grandchild. As I gaze longingly at the pictures coming in from Hawaii where mom, dad and little Donovan (their first) take up their post-natal journeys together, the word keeps coming  to me. Redemption. Redemption. Redemption. Like the heartbeat of God beating in my own heart. It was a long, difficult day of deliverance for this child and mother...and dad. A few complications and a caesarian section later, he has arrived safely and more completely into this world.

First, I am grateful for the safe delivery of mom, baby....and dad. Thanks be to God and the wonderful medical staff who gave care and protection. Redemption. But let me go back to this new dad, my son, and his mother, my wife, who more than any other single person, gave her son hope and encouragement, and a reason to go on time and again through the challenges of his life. She saw this day long ago in her dreams and visions, and dared to share them with her son, who claims that this vision, in his darkest times, drew him forward into...Redemption. She had seen this child, and held this promise in her heart....and believed...and as St. Paul wrote in II Co. 4, "we believe, and therefore we speak [the Good News of Redemption]". "The hopes and fears of all the years are met in thee tonight." These words mean more to me now than they ever did before.

Diagnosed at age 6 with Type I diabetes, my son played hard and worked hard to live a full and "normal" life. Whenever he became discouraged (because diabetes is relentless), his mom was always there to care and to guide and to comfort and to encourage. Once, soon after his diagnosis, he was going for the Presidential Fitness Award through his school. He excelled at every aspect of the program. But there was the final obstacle--the mile run--maybe it was 2 miles--it could have been 100 from where I was standing.  . For a 7 year old, and much more for one with diabetes, this was big.  Familiar with every nuance and cue, this mom had already learned to read our son's condition at any moment. About two-thirds the way through the  course, she could tell he was flagging.  Protocol says that when a diabetic feels fatigue, he should immediately discontinue physical activity and address blood sugar issues with carbs. She was ready at course-side with a snack and said, while briefly running beside him "You can do this, Son. You're almost there. I know you can do it. Don't stop. I believe in you!" And he made it. Many would have quit. But he made it. The Presidential Fitness Award Certificate, signed by President Reagan, is still in his old room today.  This scene, played out at Osborne  Elementary School in Sewickley, Pa., became the metaphor of their relationship. Encouragement to finish the race. Redemption.

Throughout his life, because he has always tried to stay healthy by keeping his blood sugars as low as possible, he has often danced too near the "too- low blood sugar zone" and suffered a number of seizures. Somehow, God always provided a person familiar with what to do to be in his presence each time. Redemption.

Never lacking a girlfriend, he did at times wonder if  "the one" was out there for him. His mother said, "Son, I have SEEN your son. The creed says 'we believe in all things seen and unseen.' I am believing  it for you." Some months later, at the urging of his mother, he came to Christmas Eve services at the church I serve and, right there on the spot, lightning struck. They met. Love at first sight. Marriage less than a year later. At their wedding I preached, "God brought Christopher's wife halfway around the world (from Hawaii where she was born and raised) to meet him here in Charleston (via Joint Base Charleston Air Force and St. George's Episcopal Church)", and now she is taking him back there (soon after they became engaged, she was assigned to Honolulu). She, like his mother, is a beautiful, winsome, selfless encourager.  Redemption.

Their first pregnancy did not last long. He took it hard. They were discouraged, but they decided to try again. And here we are today. Redemption.

And when, as planned, my precious, faithful, ever-patient encouraging wife gets to hold that boy, whom she has held in her heart for so many years, in her own flesh-and-blood arms, there will be glad tears of redemption shed. Likewise, when I baptize that boy in the Pacific Ocean off the beach near Honolulu, he will more fully be included in God's plan of redemption, having been buried with God's own Son in His baptism and having been raised to the new life of redemption and resurrection. Son, to son,  to son, to Son.

There is so much more to this story, as with all stories. But it has been an exciting and nearly sleepless 24 hours. And as I drink in the picture above, with my son holding his son--his long-hoped for and hard-won son-- I see Redemption. All who are discouraged or weary, take heart in this picture. As Jesus says in Luke 21:28 "And when these things begin to come to pass (armies arrayed against you), then look up, and lift up your heads; for your redemption draweth nigh."

Posted by AxTwoSix by Chris Huff at 11:28 AM