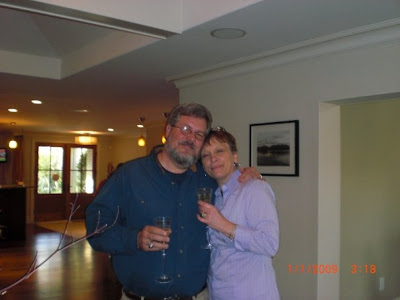 The first thing anyone should know about me is that I do not exist as one person. My being is inextricably intertwined with another; that is, my beautiful wife, Kim. We have dated for 41 years, since September 30, 1972, when I was 16 and she was 15. We celebrated our 35th wedding anniversary in August.

We were both born and raised on James Island near Charleston, SC.
We remember when the only business on Folly Rd. between the Wappoo Cut Bridge and the Ellis Creek Bridge was Vick's Driving Range. The rest was woods. How things have changed!

Kimmie and I have three grown children: Chris, Jr. married to Lynn Ras and living in Honolulu, Hi., with our second grandson,  Jennifer Huff, living on James Island with her mate and our granddaughter, and Ashley, married to Dillard Umphlet and living in Summerville, S.C. They have our first grandson.

My Uncle Dick Gadsden (dec.), a descendant of Christopher Gadsden, 4th bishop of South Carolina, was the head of Biochemistry at the Medical University of South Carolina. He was a world renowned lecturer in Biochemistry. He used to joke to me and my brother, "You know what your problem is? You ain't got no education!" The longer I live, the more I think he was right! There is so much to learn, so much to discover, so much to experience.

I received a public school education until the 8th grade. I graduated from Porter-Gaud School in Charleston in 1974. I received a BA in History at the College of Charleston in 1978. After a stint in banking (I was a branch manager for C&S Bank at the 544 King St. branch), and a time selling printing for a  company based out of Atlanta, I received a Masters of Divinity from an Episcopal seminary then known as Trinity Episcopal School for Ministry in 1988. It is now called Trinity School for Ministry.

I owned and operated a clock restoration company from 2002-2012.

Our preferred method of boating is sailing. We haven't been off-shore in a while, but are gearing up for that again soon.

We Both Play Piano (and Harpsichord!)

I am tied to the page. My favorites are Bach, Mozart, Chopin and Gershwin. I was the pianist for the Porter-Gaud Glee Club under Ben Hutto.  Kim can play the page AND improvise. I also play guitar.
Our favorite times are evenings alone, playing music for one another. Note the "Liberace" candelabra on Kimmie's baby grand. It was a gift from our son-in-law. A "must have" living room accessory!